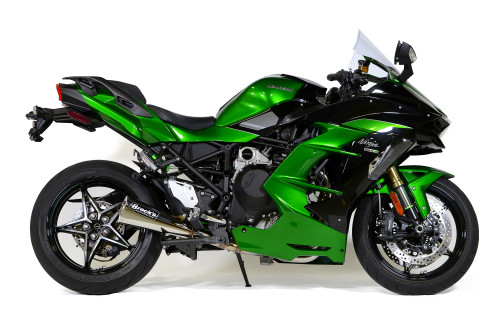 The Alien Head 2™ for Kawasaki’s newest hypersport touring motorcycle is ready to take your supercharged Ninja H2 SX to the next level. Designed in-house by the Brock’s Performance team of national championship-winning product engineers, tuners and racers, the H2 SX system was developed with input taken directly from H2 SX owners via internet forums and other social media.

Brock’s team used every trick in the book to produce the Alien Head 2™. During testing, the supercharged Ninja spit fire and lit up many prototype headers as it went through a vigorous research & development program on the dyno to extract maximum power from the 4-into-2-into-1 exhaust. The end result is a stunningly crafted system that unleashes the supercharged Ninja’s true potential. In addition to feeling the incredible weight savings, H2 SX owners will admire the clean look achieved with the removal of the OEM pipe and it’s bulky catalytic converter.

WARNING: Due to the extreme nature of the Ninja H2 SX, all Brock's Performance exhaust systems are designed to be used in conjunction with a BrockFLASH ECU Stage 1-F with Fuel Tune. Any other configuration could result in premature exhaust wear that will not be covered under warranty.