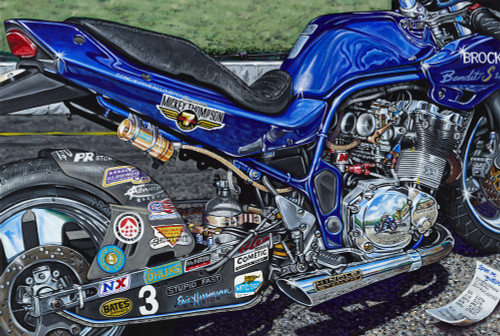 On May 22, 2000, Brock Davidson made drag racing history by becoming the first person on a street legal motorcycle to enter the seven second zone in the 1/4 mile. Brock’s Bandit is the bike that started it all for so many, and is arguably the bike that began the no wheelie bar street tire craze that we still enjoy today.

“With the 20 year anniversary coming up soon, I wanted to do something special to commemorate the first seven by a streetbike. I have known Eric Herrmann for several years now and love the way he can make a painting jump off of the canvas. Even though this is Eric’s first attempt at painting a Japanese motorcycle, he managed to not only come up with a beautiful image of an iconic machine, he also captured a moment in time. Those who were around for the event will love the hidden memories in the image; those who are new to motorcycle drag racing can appreciate the beauty of a chromed-out, nitrous-huffing beast that was ridden on the street back in 2000 and is still a street prowling monster to this day. A seven second streetbike was fast back then, and it’s still fast now. I said it before, “Someone will always be faster, but no one will ever be first in the SEVENs again.” – Brock Davidson

"Seven" is my latest painting for Brock's Performance of his record setting "7" second Street Legal Drag bike. A Drag Racing Milestone accomplished, coming up on 20 years now! As always, I hid some details in there for you to discover. I love the opportunity to paint Motorcycle History! Thanks Brock! - Eric Herrmann

American made product printed in house at the artist's studio using a vapor phase transfer process, where the ink turns to gas under heat and pressure. The gas then impregnates the image onto the surface of the aluminum. Enjoy lasting beauty with this extremely durable, lightweight, and scratch resistant surface. Comes complete with hardware and ready to hang.

Educated at Triton College of Fine Art in suburban Chicago and Arizona State University, Eric holds a BFA in Graphic Design with studies in painting and printing technology as well. With his formal training completed, at which he excelled, he moved in to the business world of art. Successful ventures over the years included a graphics firm, several screen printing businesses, and a product design firm. Tiring of the business grind and longing to return to his artwork, Eric and wife Suzanne sold the business so he could concentrate full time on his paintings. He quickly realized that to become a world-class artist, you need to paint what you know.

Having ridden bikes for over forty years, painting them and the biker lifestyle is a natural for Eric. A lifetime of experiences at any race around, from the drag strip to an oval track, has given Eric the understanding of what it takes to go racing as well. His knowledge of the subjects is what makes an Eric Herrmann painting stand-alone. He has won acclaim for not only his depiction of vehicles, but his use of composition and color as well. Collectors and corporations in over forty countries worldwide seek after Eric’s art. His art has been shown at The Petersen Museum in Los Angeles, The American Motorcycle Association Museum in Ohio, The San Diego Automotive Museum, and numerous galleries throughout the world. Eric exhibits his work at all the major motorcycle events as well as numerous racing venues annually. His artwork is used for advertisements, novels, menus, clothing lines, collectible coin sets, and fine art prints. Eric’s commissioned paintings include work for Jack Daniel’s, The Barrett-Jackson Auto Auction, Discount Tire Co., The Indianapolis Motor Speedway, and numerous other motorcycle and automotive related corporations. His art frequently appears in magazines such as Easyriders, Hot Bike, American Rider, The Robb Report, and Phoenix Magazine.

Eric’s original paintings take from three to five months to complete. They are all done by hand with only a brush on canvas and acrylic paint. Large in scale, averaging four foot by five foot, Eric’s originals have sold for over $70,000.00. All original paintings have been sold, and a waiting list usually exists. Eric and wife Suzanne reside in Cave Creek Arizona with sons Ian and Dustin, C-4, the Doberman, six motorcycles, several cars, trucks, quads, trailers...